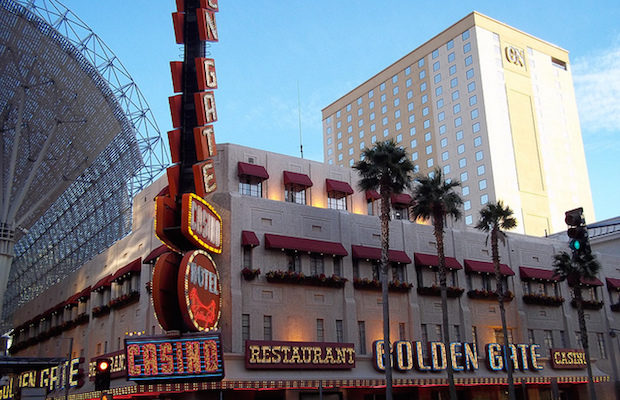 Visitors fond of Las Vegas history should include a trip here, to the place where modern Vegas began. Golden Gate Las Vegas is the very oldest casino of the entire town, opening in 1906 as the Hotel Nevada. It had gambling at that time, too, so it really was a casino. (For their history, check the timeline on the hotel’s website.) Since it existed throughout the industrial growth of the country, the hotel can claim other firsts as well. For instance, it was given the very first telephone number for the city: 1. Its address on Fremont Street is also 1. Just so you don’t forget its age, their players club is called Club 1906.

In 1931, gambling was made legal again after an awkward, long, off period. That year, along with some expansion, the hotel was given the equally awkward name Sal Sagev, which is “Las Vegas” backwards. Finally in 1955 ownership changed hands and it was renamed Golden Gate, after the famed San Francisco bridge. The new owners happened to be a group from San Francisco. It is located in the heart of Downtown, and you can see it on Google Maps.

Note: Searching maps for 1 Fremont Street doesn’t work quite right on Google, and you should look instead for the intersection of Fremont and Main Streets. The casino is part of the Fremont Street Experience, the canopy of which stretches for 4 blocks of Fremont, from 4th Street to Main. It is the very first property, at the entrance of the Experience.

Today the property is owned by the brothers Derek and Greg Stevens, who are also majority owners of The D. The hotel is now 110 years old as of this writing. You can rent some of those very old rooms of the hotel — which of course have been renovated and updated. Other rooms and suites are part of the luxury expansion that came in 2012.

The Dancing Dealers are the athletic ladies dressed in 1920s-30s flapper costume, who dance as well as handle table games, just like at the Stevens brothers’ other property, the D. Other entertainment such as street dancing, live music concerts and more can be found just outside the front door, in the Fremont St. Experience.

The hotel has always offered a ridiculously inexpensive sundae-glassful of shrimp since the end of the 1950s, modeled after San Francisco’s Fisherman’s Wharf. The price started at 50 cents and was a long while before rising to 99 cents in 1991. It slowly went to a reluctant $3.99 as it is today. They sell reportedly a ton of shrimp each week and the casino is known as the home of the Original Shrimp Cocktail. 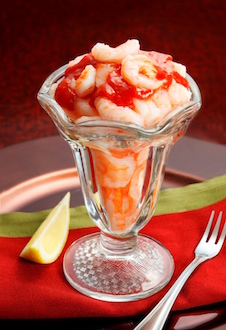 Du-Par Restaurant & Bakery — This diner is where you go to eat the famous shrimp cocktail; it’s open 24 hours. 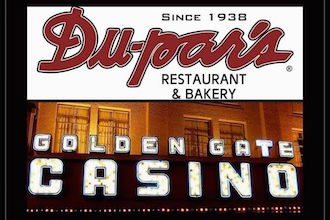 The hotel started accepting Bitcoin in 2014 as currency at the front desk. It can be used to pay for rooms, food and drink. They are not yet permitted by law to accept Bitcoins for bets or chips in the casino. So sayeth the state regulators. Bitcoin has been slow to catch on in Vegas, despite the 2 hotels’ introduction of the payment here. There are some local places to spend bitcoins, however, and a couple of Bitcoin ATMs.