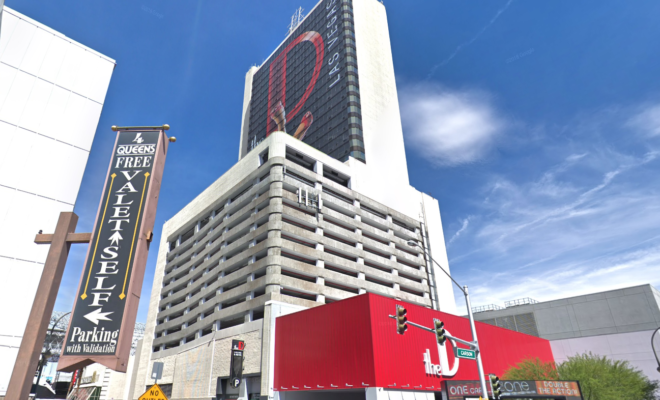 If you’re downtown, look up, and watch for a pair of attractive, gigantic legs in spike heels illuminated on the side of a tall building. That’ll be The D. The legs are there to remind you that this is a party spot, and has sexy women who work here called The Dancing Dealers. These dealers work on the first floor of the casino every evening to deal the cards, but they also do pole dancing.

This property originates from 1979, when it was known as the Sundance, making it one of the more venerable (old) places of Vegas. See it on Google Maps. But the downtown area after all holds the majority of the oldest casinos, since it was developed first. In fact some people expected the downtown and Strip areas to join up at some point. By 1987 it became Fitzgerald’s, but the owning company went into bankruptcy and Don Barden (original owner of the Pittsburgh Rivers Casino) purchased it. After he died in 2011, his estate sold it to the Stevens brothers Derek and Greg, who are majority owners of the Golden Gate. Opening the resort in 2012 after an investment of $22 million for renovation, these owners practice the interesting task of preserving the past in one of the most impermanent, forgetful cities in the country. But at the same time, they manage to offer a live-for-the-moment resort with a party atmosphere.

The “D” of the name stands for Detroit, Derek Stevens’ hometown. As a party spot, this casino gets rather smoky and is usually crowded. It’s a popular place for bachelor and bachelorette parties, for which it offers special rates and drink deals.

Two other big things the casino is known for are: a floor full of vintage slot machines, and the Long Bar. 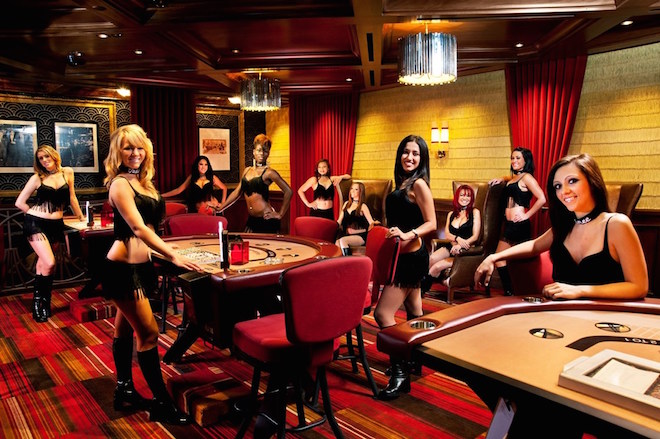 The first floor of this two-level casino gets pretty noisy, particularly after 6pm with the arrival of the Dancing Dealers. They deal the table games, and will also pose with visitors for photos.

Vintage slots fill the 2nd floor. Some of these wonderful games are rare antiques. For example, there’s the Sigma Derby, which is an electronic horse race game, which takes coins and also pays out in them. There are only two of these machines in the entirety of Las Vegas now, but they both still work and you can bet on them. (MGM Grand has the other one.) The coin slots are some other favorites, something you simply won’t find on the Strip except at Circus Circus & Slots A Fun; nearly all the coin machines now are downtown. 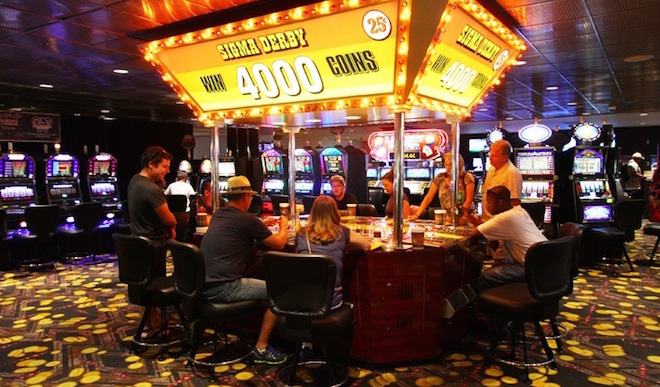 The video poker here is a favorite, too. And Keno is a better game downtown, somehow; people who play it will want to try out the tournaments.

The sports book is a William Hill operation, with all the sports events you could probably ask for.

American Coney Island — A Detroit tradition, hot dogs and available 24 hours.
Andiamo Steakhouse — Fine dining with a good foundation and excellent cuts of meat.
D Grill — Breakfast all day, or dinner grill selections with an Italian/European touch, such as the Portuguese sausage.

They’re all made with an aim to be fun and friendly.
The Longbar — longest bar in town. The casino says it’s 1,000 square feet, and it is around 100 feet long, so the bar is probably only 10 feet wide. It’s a natural for sports watching, with so many flatscreens above the bar.
The D Bar — outdoor bar with dancing and juggling bartenders, fancy frozen drinks.
Vue Bar — in vintage area of casino, 2nd floor, balcony looks out onto Fremont Street.

It is easy to find many poor reviews online as far as smokiness, room cleanliness, and general aging condition of the building. This doesn’t disturb its big-party reputation, and many visitors are happy enough to find an active place with lots of dancing.

To foster the image of forward-thinking and modernity, the hotel was the first to take Bitcoin for room reservations and purchases. If you’re concerned about downtown parking, you should know the hotel does have its own parking garage.