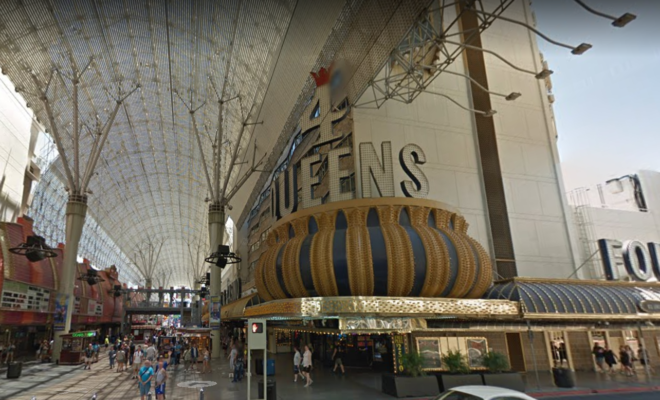 Opened and running since 1966, this vintage hotel is located in Downtown Las Vegas, on Fremont Street. Initially it was constructed with just 120 rooms but now has two tall towers, North and South, and a total of 690 guest rooms and suites.

Four Queens is across from Binion’s Gambling Hall. It’s instantly recognizable as that corner property with the striped golden neon round with the words “4 Queens” above it, reminiscent of the carnival decorations of two centuries ago. They spell their name in print as “Four Queens” but their signage uses a numeral 4. Factoid: The name comes from the original builder Ben Goffstein’s four daughters, Faith, Hope, Benita, and Michele. Here it is on GoogleMaps.

Once you’ve arrived at the casino, you’re center front for the Fremont Street Experience, the roofed casino extravaganza where you can stroll from one to another, because the casinos are only steps apart, with all kinds of street fair sorts of entertainment you can enjoy without bearing the heat of the sun. The crowds here are fun rather than otherwise. 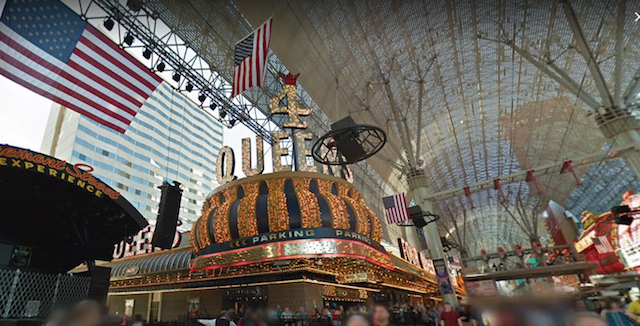 The casino has over 1025 slot and video poker machines, denominations of a penny to $25, with the most common progressive machines (Wheel of Fortune, MegaBucks). They also run a sports book (a William Hill operation), but their poker room seems to be closed. Table games include the usual blackjack, craps, roulette, 3 Card Poker, Let It Ride and Ultimate Texas Holdem; they also have Mississippi Stud and their own Blackjack Switch. Keno has a progressive jackpot of $1 million.

If you stay at the Queens, you’ll find downtown hotels a good deal compared to many of the Strip megahotels. The suites are called Royal and Regal, and either type can hold up to 4 people. The suites all have a leather couch that opens into a queen bed, a bar, large TV, mini-fridge, coffee maker, more.

They have no Resort Fee, so you don’t have to calculate that into your prices. Club card is the Royal Players Club, which has added over-55 benefits, including 20% off standard room rates, gift shop purchases other than food/smoke/drink items, a birthday 2 for 1 meal, and 20% off their 3 restaurants: Hugo’s, Magnolia’s, Chicago Brewing Co.

Hugo’s Cellar is the fine dining spot. Get a char-broiled steak, lobster, Beef Wellington, or rack of lamb.
Magnolia’s Veranda is open 24 hours.
Bars: Chicago Brewing Co., whcih has their own microbrews, pizza and entrees, cigars. The Patio Bar, which has both indoor and outdoor seating, has a view of the Fremont Street concert stage. It has misting controls for hot weather and heating for cold.

Added Hotel Notes: internet wifi is an extra charge. During the warmer seasons, 4Queens guests are welcome to use Binion’s pool on the 25th floor, because it’s a “sister” hotel.