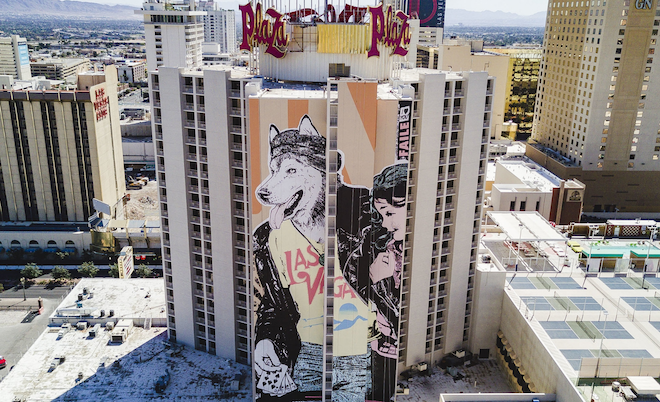 While you might already be aware that the downtown area of Las Vegas was built first, the history of the Plaza Hotel-Casino underscores that fact. It wasn’t built until 1970, but what was first on that property happened to be the very first train station for the city, and this was created in 1906. It was called the Union Pacific Station. In 1940, the building was torn down and a new station was built on the spot , and this lasted until 1970 — when the Plaza Hotel was conceived.

The original name was the Union Plaza Hotel, taking part of its name from the old train station. And the hotel still had a tiny depot in it for Amtrak, back then. Until 1997, Amtrak (which by then had its own building) still had ticket windows and the train station actually connected to the Plaza Casino.

The building has retained its southwestern adobe color and fiesta-style logo. See it here on Google Maps.

It’s easy to recognize by several murals splashed hugely (21-stories) down the sides of the towers, specially commissioned from artists Shepard Fairey (who created the iconic red-blue “Hope” likeness of President Obama), D*Face, and Faile, a two-man artistic team. They are all extremely modern, offbeat, and rather incredible paintings, all in comic-book, graphic-image styles.

The outside hotel facade may look very, very familiar. Its design was used for the fictional casino belonging to villain Biff Tannen in Back To The Future Part 2. The hotel has also appeared as itself in quite a few other films. In the James Bond film Diamonds Are Forever, you can briefly see the hotel actually under construction.

A recognizable feature of the building you’ll often see in photos is the glass-domed section, which has a nice skyview. This is where Oscar’s Steakhouse sits — a restaurant named after a former mayor of Las Vegas. 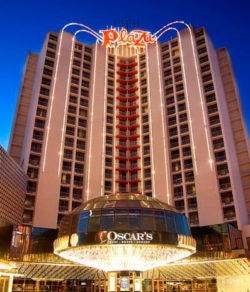 Pool: The Rooftop pool is open year-round, located right above the Fremont St. Experience. A 12-person Hot Tub is on the roof too, with Hours: open from 9am to sunset. Local residents with ID (over 21) may have complimentary access to the pool, too.

Self-parking for guests is included in your resort fee.

Like lots of the downtown properties, Plaza offers lot of bingo, with 400 player seats available. It is in fact home to the largest bingo tournament, Super Bingo, a $175,000 competition, biggest of all downtown. On a daily basis, the Bingo Millions MegaProgressive is offered at 6 sessions every day. There’s also regular daily bingo in the Bingo Room, 6 sessions per day.

Slots: Plaza has over 700 slot and videopoker machines, and players would want to know that some video poker machines here have over 100% payback. The floor offers Progressives and Megabucks; and you’ll find penny, dime, dollar and 5-dollar slots. There’s also 3D and high-definition games; Vintage Vegas (Catch The Heat), and good old coin slots — a specialty of downtown. The casino’s temptation to lure you in this summer is its Scorching Slot Tournament with prizes worth $10,000. Their regular slot tourneys run three times a week — Wednesdays, Thursdays, Fridays — with 4 sessions each day; prizes are all in free slot play up to $350. 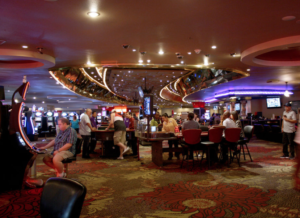