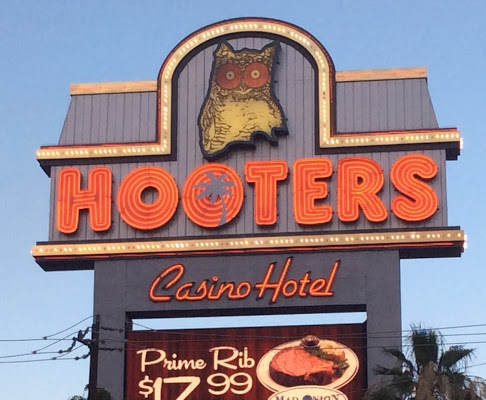 Hooters Casino Hotel officially opened in 2006 but had been operating and refurbishing for years since the property changed hands after ceasing to be Howard Johnsons. It is an off-Strip hotel with a claim to fame: scantily dressed cocktail waitresses who look great. However, the hotel pulls in a lot of complaints on the travelers’ review sites, mostly due to the age or disrepair of some guestrooms.

Occasional room problems result in a wide range of visitor testimonials; i.e., one happily saying, the “rooms were just marbelous (sic)” — while another termed the hotel “a crap-hole.” Checking in is also a point of contention, sometimes with long wait times. Staff attitude and helpfulness have been rated as very good, nevertheless. Here’s their location on Google Maps. The building is around the corner from Excalibur — or next door to the Tropicana. The street address is: 115 East Tropicana Ave., Las Vegas NV 89109.

They are known (and valued) as a lower-priced stay, with rooms going as low as $35 a night, before the resort fee, includes free parking and Wi-fi in guest rooms and public areas. Rooms are attractive and usually comfortable, with modern decor. 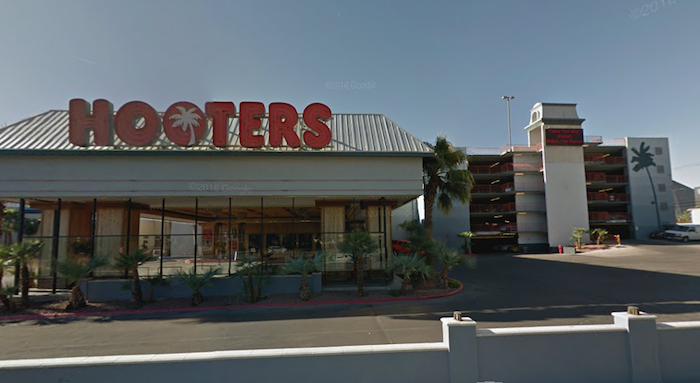 (At the time of this writing they may not still be offering a game of single-deck blackjack paying 3-2. But if it’s there this would be the place to play.) The casino’s blackjack has been panned on some sites: Although one game offers a nice low $3 table limit, it is a 6-deck game with a huge house edge. Look around there and you may find a 2-deck game that has better odds even with a min. bet of $5.

The gaming floor has 580 slots including lots of penny machines, video poker, and multi-denominational slots. Examples of games: The Hangover, Ghostbusters, Sex and The City, Alice in Wonderland, and progressive jackpot games Megabucks and Wheel of Fortune.

The casino’s sports book is operated by William Hill.

For entertainment, consider the Hooter stage. The permanent show presently features Hypnotist Kevin Lepine. The pool is generally open 24 hours a day, every day — and there’s a bar next to it. Similar to its chain of restaurants across the country, they regularly host bikini contests.

Restaurants here are: Hooters, Mad Onion, Saloon, Pete & Shorty’s.
Other features of the place include: a 24-hour fitness center, 2 pools.

What was here before: The Howard Johnsons opened here in 1973, which years later took its present name.

Things to note: The poker room here closed in March 2015. The players card is called Rewards Club+.
Pets unfortunately are not permitted.