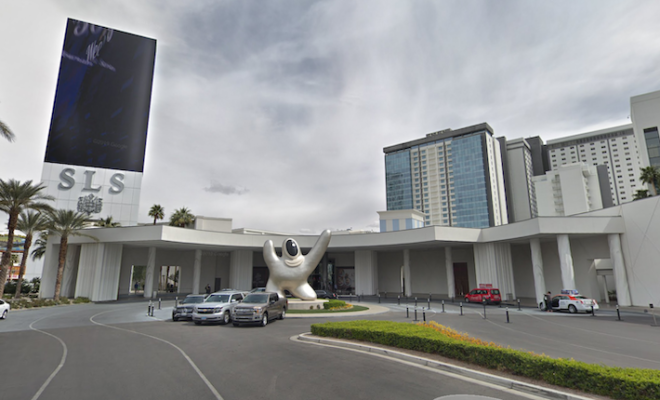 The city of Las Vegas chooses its own culture and look; sometimes it moves determinedly forward, while at other times it stops and turns to look over its shoulder at what was once here. The modern-looking SLS Hotel is an example of the 2nd kind, as it prepares to go back in time and reclaim its old name — the Sahara. The hotel ownership announced in June 2019 that it would return to its old name by the fall, news which reminded everyone how the Sahara was one of the last vintage properties existing; there were just 6 hotels left that had stood in the 1960s, and Sahara was one. The other oldtimers are Tropicana, Flamingo, Caesars Palace, Circus Circus, and the Riviera, which closed in 2015.

The Sahara, which had been built in 1952, operated under several different owners until 2011, when Sam Nazarian decided to close it down for economic reasons. Here is the hotel on Google Maps.

Many would recognize the old former building, with its camels on the marquee, and Moroccan theme of Arabian luxury, similar to old hotels the Sands and the Aladdin. In 2013 Nazarian converted the building into the SLS Las Vegas. SLS is said to stand for “style, luxury, and service.” Its exterior became a modern, cube-and-rectangle form in white and silver with a very odd amorphous statue in front, a stylized version of former CEO Sam Nazarian himself, created by artist Philippe Starck. Its name is “Saam,” and still stands there today.

He sold the hotel later to the real estate corporation called Stockbridge, which sold it to the Meruelo Group.

The hotel boasts an approximately 60,000-square-foot casino with over 700 slots, including video games and reels. There are two casino bars, where you’ll find bartop video poker; in the rest of the slots sections they offer mechanical reel games like progressives Wheel of Fortune and Megabucks, and Top Dollar or Cash Spin Delux; as well as video poker machines and video slots too.

The sports book is a William Hill brand, and offers mobile betting you can use on an iPhone, Android device, or iPad. The betting area has 50 TVs and a sports bar and Beer Garden and Umami Burger restaurant. The sports book is open 7 days a week.

The players’ club is called Club 52.

The hotel, which definitely leans more adult than family-friendly, has 1350 rooms and 250 suites. Two elegant bars are there to visit, in addition to the sports bar: the Casbar and the Paradise Lounge. Free live entertainment shows happen in the Casbar from Thursday to Saturday, 8pm to midnight. Both bars are open 24 hours.

Entertainment is also offered in The Foundry, their 1000-seat showroom, and the Sayers Club, a more intimate music venue.

SLS pools include the Foxtail Pool, a resort haven with food and “mixology” (aka alcohol); the Retro Pool Lounge, which is a rooftop pool of more comfort and relaxation, and open only seasonally. The third pool is the Grand Pool, located in the Grand Tower section of the hotel; it allows topless sunbathing so visitors must be 21 or over. In all pools you can rent a cabana.

A fitness studio with 24-hour access tops off the amenities, with cardio machines, free weights, circuit weights, workout mats. It is in the Story Tower, second floor.

As mentioned, the hotel is not generally a family destination, more a grownup one, with its topless pool and elegant party atmosphere. Its upcoming renovation and renaming will be updated in this space.