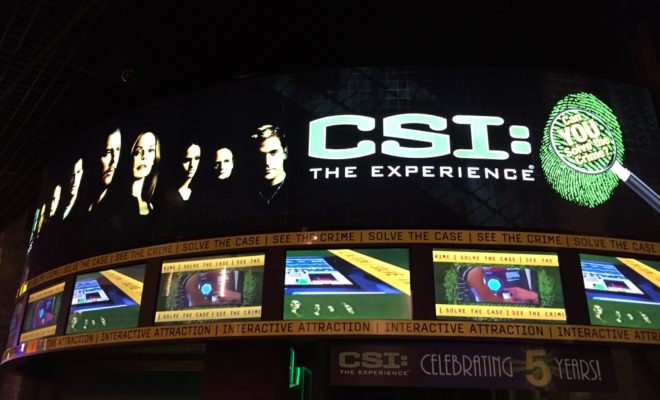 Anybody who is going to Las Vegas and loves CSI needs to stop at the MGM Hotel and Casino to check out CSI: The Experience.  This experience takes you through different crime scenes where you look at the evidence and at the end of the tour you get to solve the crime using the computers provided.  There are three different crime scenes you can choose from and this helps to make the experience go much smoother than if there were only one.  Other than the crime scene areas, there are other areas that aid in your investigation and that allow you to use the evidence to make your determination.

There are seven main areas in the exhibit including the three crime scene areas:

You can download some fun filled guides that will help your family hone their observational skills before you take on the task of solving a crime.  These guides can be found on the CSI: The Experience website and can be downloaded and printed out for all the family members to try.  Teachers can also use these guides in the classroom to teach their students these same tactics. The following is a list of the games and activities that will help your powers of perception and observation:

This interactive experience is not cheap but it is worth the thirty dollars that you pay to spend a few hours out of the hot Las Vegas sun.  Nearly every Las Vegas magazine that is found on the strip including coupon books has an offer for five to ten dollars off this attraction.  Take advantage of these savings before heading over to the MGM Hotel and Casino.  You can also get savings by signing up for the players club at the MGM.

This is one of the best interactive attractions in Las Vegas at the moment.  It is not only fun but it offers a great chance at learning new skills for the entire family.  Whether you come to Las Vegas for a business trip, convention or just a family holiday, CSI: The Experience is a must.  Even locals who never venture near the Strip have taken the time to check out this awesome exhibit and to become forensic detectives in their own right.